I have been doing a bit of a retrospective over my three years of writing by listing the top 10 things that have happened to me since I have started writing.

Almost as long as I can remember, I’ve  been a fan of local businessman Joe Edwards. As a kid, he was the owner of Blueberry Hill, a local restaurant that was really well known in the area. Joe had opened it way back in 1972. 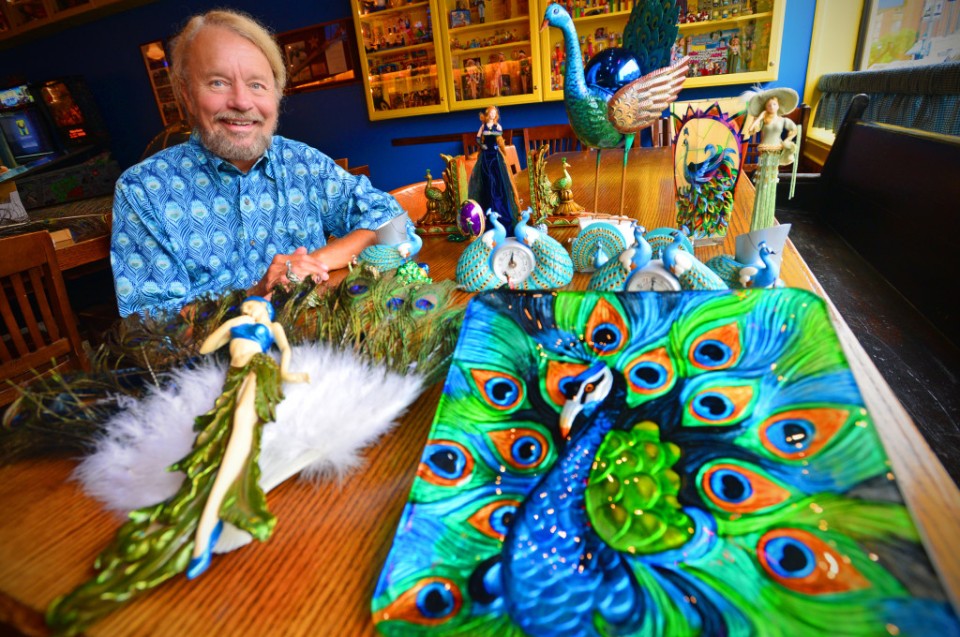 Joe Edwards at Blueberry Hill, picking out items for the opening of his new Peacock Diner

Inside the restaurant was an eclectic gathering of pop culture items. Lunch boxes, Howdy Doody memorabilia, board games, movie and concert posters and much more filled every nook and cranny of the restaurant. I first became a fan of Joe’s when he made the local news when the creator of Archie comics came in to dine during a visit to St. Louis. As he was looking at Joe’s impressive collection of memorabilia, he noticed one piece of Archie memorabilia he didn’t have in his personal collection but had been searching for: an lunchbox from the early years of the comic.

The creator of the comics tried to buy the lunchbox, but Joe Edwards wouldn’t sell it. Instead, Joe offered a trade. If the Archie creator would put Joe in an Archie comic he would give him the lunchbox.

That’s right, a few months later, Archie and the gang go out on a road trip and stopped by Blueberry Hill to meet “cartoon Joe Edwards.”

Man, I was hooked. If you could parlay a lunchbox into getting your mug in a comic book… now that’s business I can understand.

I went on a mission to go to Blueberry Hill, but, my Dad, who was a policeman, wouldn’t take me there. “It’s a bar and it’s in too bad of a neighborhood,” he’d tell me.

The next several years, I continued to catch Joe in the paper promoting Blueberry Hill. When he noticed people writing on the bathroom walls… he noted that the stuff they were writing was either funny or oddly insightful. Deep thoughts kind of stuff. So he encouraged it. You could ask for markers at the bar and write on the walls of the bathroom. Then Joe would take the best sayings and sell them on these “graffiti shirts.”

Dad, “Can will you take me to Blueberry Hill to get one of those graffiti shirts?”

I think you can guess his answer.

Fast forward to when I turn 16.

Guess where the first place I went?

Burger, malt and one of those graffiti t-shirts!

Joe was even there.

What used to be vacant buildings, or drug paraphernalia and voodoo shops is now a vibrant area of restaurants and respectable businesses. Much of this is due to Joe’s efforts. He started buying up property and investing in the area. Soon he owned a hotel, more restaurants, a bowling alley and two music venues in the area. He also headed up the St. Louis Walk of Fame which honors individuals who have lived in St. Louis and contributed to society in some way with a star on the sidewalks of the Loop.

His latest project is an impressive one. He’s bringing trolley cars back to St. Louis. He’s navigated the local regulators for approval and even the Federal government for funding to create a line that will take you from Forest Park, which is a large urban park in St. Louis city where you can enjoy the outdoors and museums to the Loop where you can enjoy amenities like restaurants and shopping. It’s such a great idea it’s unbelievable. On a personal basis, I can’t wait for this to get completed. My Dad’s father, my grandfather, was a trolley car driver in St. Louis. It will just be special for me to ride one of these trolley cars my father used to tell me so much about.

All of this gets me to the story. I just wanted to set the stage to tell you how important Joe Edwards is to St. Louis, and specifically the area known as The Loop, as well as how much I’ve followed his career… from a distance. After my father passed away, and I started writing, the first real book I was working on was the book about my father, Life with Akester.

I sent an email and the woman who responded said I really needed to call her.

I thought this wasn’t good. Was she going to tell me I couldn’t write the book? Why did she need to speak to me?

So, I dialed the number she gave me. We spoke briefly. She said they were fine with the concept of the book. They even had some photos I could use. I started asking a little bit about the history of the restaurant when she said, Joe would be better off answering these questions.

In the background, I hear her say, “Joe, this is Steve from the email. He’s asking about the history of Blueberry Hill.”

Next thing you know… I’m talking to Joe Edwards.

The call was great. Do you know how when you look up to someone, you just want them to be human. When I was a kid I used to idolize baseball players. I’d play street ball and you would stand at the plate with the mannerisms of the ballplayers you liked. All of my friends did it. We used to wait for the opposing team’s players by the hotel right by the stadium for autographs. It was amazing. So many of them would yell at us. Here I am, a 10 year old kid who just wants an autograph of the guy I’m acting like at the plate, and here he is screaming at me. “Don’t you kids have anything better to do.” It’s me, my fellow 10 year old neighbor and his 3 year old brother. Not an overwhelming amount of people mind you.

Anyway, you just want these people to be… people. Well, that phone call with Joe couldn’t have gone any better. He answered every question. Took an interest in my project asking me about it. Just a great guy.

I continue to look up to Joe Edwards for everything he’s done for the area. Most of all, I respect those 30 minutes he spent talking to me about my Dad and my book.

This all happened for one reason…

It’s because I write!

Write Steve Write! is a weekly blog by author Steve Akley. Typically it is posted on (most) Sundays and features insight about his writing… though there is an occasional movie review or random thought post. It should be noted it’s posted as a live feed… no editing, no planning beforehand, it’s typed out on Sunday morning and the “publish” button is immediately hit. Apologies for any errors but you get this just as Steve thinks it!

Coming Sunday: We’ll be continuing on with my “It’s Because I Write” series next week!

In the meantime, follow check in on Steve in a variety of ways:

Check out the latest issue of Bourbon Zeppelin: See it here!